I didn’t “win” NaNo this year. Well, I mean, technically I produced 70K in wordage, but 50K of that was spent on finishing the zero of Harmony. Which will never get published, goddammit, and is also not the NaNo goal I set myself.

Ah well. Win some, lose some. November was a hideous fucking month, for obvious reasons.

On the bright side, the zero draft of Harmony is finished, and Afterwar just broke 20K. The characters in the latter are beginning to do just as they please instead of what I’d prefer, so that’s a good sign. And I finally found a volunteer spot! Lots of places were swamped with volunteer candidates after the election, but I managed to find a place where I can do some good. So that gives me a warm fuzzy.

It’s getting chillier, and local squirrels are becoming braver. The Princess has sent me pictures of them crouching on the deck, eyeing the French door balefully. She’s not yet nervous, although I think she should be, because she sends those pictures when she’s at the table. I think the squirrels are trying to figure out how to break through said door and knock her down, preparatory to stealing whatever she’s snacking on at the time. She thinks I’m being ridiculous, and that there is no way a squirrel could break into our house.

The library finally got a copy of The Angel of History for me to attempt. I bounced pretty hard off Alameddine’s first book, but I’m hoping this one will be the magic door. I also picked up another translation of Death in Venice, which I should read first while the other is still fresh in my head for the compare/contrast. So that’s my week’s reading sorted. Maybe, if this cold gets worse, I’ll put flannel sheets on my bed and just…retreat, for a day.

HA, WHO AM I KIDDING? I can’t afford to take a day off. Also, we’ve run out of tissues, so I’d be getting up every five minutes to blow my nose with toilet tissue. I refuse to put a roll of the latter next to my bed, for God’s sake. I’m not nearly ill enough for that.

Still, it’s nice to think of flannel sheets, lots of hot tea, and the luxury of simply reading for hours. One day I’ll set aside time just for that.

Right now, though, it’s back to work. I may not have won NaNo, but I still finished something, and that’s a spur to finish more. Winning enough for me, at least. 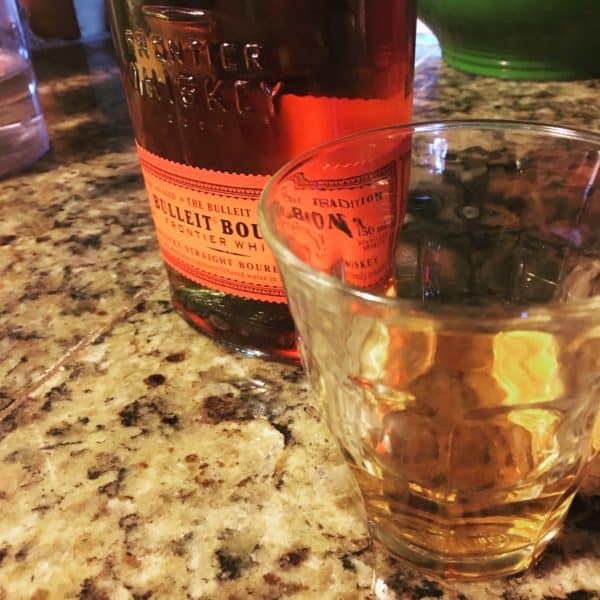 When our neighbours go on trips, one of my kids takes care of their cats. And generally, I drive them to the airport and pick them up when they come back. They keep telling me “when you travel, we’ll do the same for you”, but the thing is, I don’t travel. I hate flying, I don’t have the cash to go anywhere, and in any case, I’d rather be home writing. That may change when the kids are both well embarked on their adult lives, but for now, that’s the way it is.

So instead, this last time, said neighbours brought me duty-free booze. Which is very welcome, especially since hot toddies are probably the only way I’m getting through this cold. Alcohol kills germs, right?

So, yeah. They brought me a very nice bourbon. I could get very, very used to this.

There is very little reason for it, but I feel slightly out of my body today. Yesterday I had to force my eyes to focus, but today I’m just a few inches out of my own skin.

It’s not disassociating–I know what that feels like, and it’s in my head rather than a whole body thing. Disassociation, for me, is accompanied by a roaring in my ears and a folding up, curling around myself inside my brain and leaving my body behind. Coming back when it’s safer is the big trick, you have to have a sense of how long the bad will last. Coming back too early or too late are both equally dangerous.

Anyway, this isn’t that. I’m still in my body, yet just moved a couple inches outside as well. It’s not a feeling of unreality–I am still aware that things around me are real, and (to a lesser extent) that I am. It’s just a strange, lightheaded feeling, my essential self just a fraction to the side. Maybe my soul is a little stronger than my body can contain at the moment.

Or maybe I’m breaking down under the stress. WHO KNOWS.

I’m no stranger to divisions of self–at any moment, during any task other than writing, I may be untangling a plot or exploring a character inside my head. Training your imagination until it is agile as a ferret has the unintended consequence of making it the size of Godzilla as well, a truly fearsome proposition. Not only can it break all the china in your shop, but it can also turn on a dime and lay waste in many directions at once.

…well, that metaphor has been well and truly pummeled, I must say.

I’m wondering whether caffeine will make the slightly-outside-myself feeling better or worse. It’s not unpleasant, and it doesn’t seem dangerous, but still…I think I’d prefer not to be outside my own skin today, thankyouverymuch.

That said, I’m off to work on Cormorant Run revisions. I’ve reached the part of the book where the dominos are all set up and need only a flick of the finger to bring them down, but the real trick is, the finger-flick is not what the reader expects. It’s all but invisible. You can probably imagine me rubbing my hands together with glee, can’t you.

Well, you should, because that’s what I’m doing, in between using them to type.