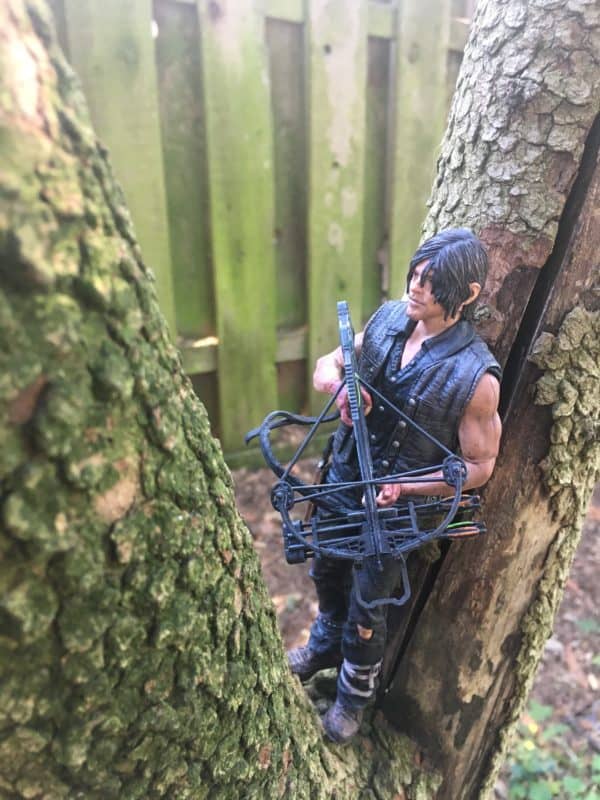 Me: I can’t believe I’m doing this.
Louis: YOU’RE A REAL PAL. OKAY, SO IS THIS A GOOD POSE?
Me: I guess?
Louis: YOU’RE NOT HELPING.
Me: Look, the last time I saw you, you were shooting at everyone.
Louis: I SAID I WAS SORRY. 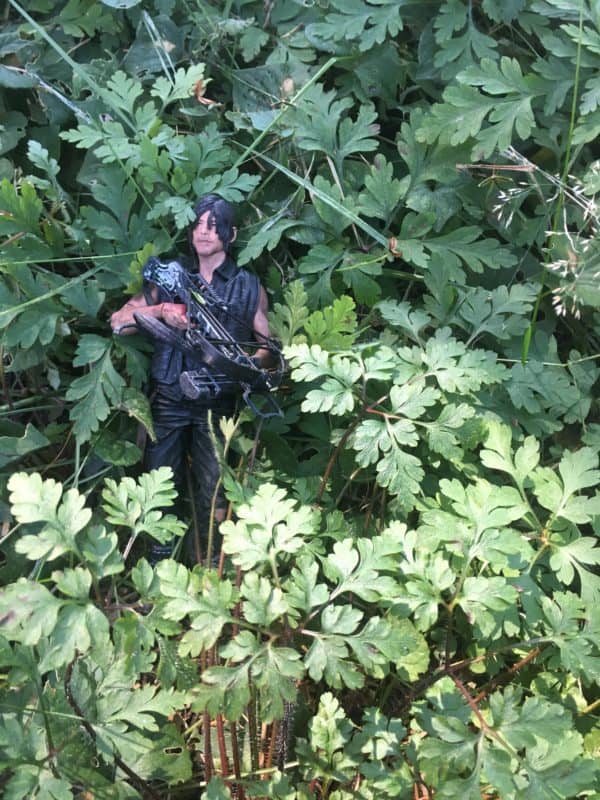 Louis: SO OKAY, IT SHOULD GO, SINGLE MALE LOOKING FOR FRIENDS.
Me: Friends?
Louis: YEAH, WELL, IT’S GOTTA START THERE, RIGHT? LIKES: LONG WALKS, NATURE, COLD BEER. SHOULD I PUT DISLIKES?
Me: I’m not sure there’s space.
Louis: GOOD POINT. ACCENTUATE THE POSITIVE. DID YOU GET MY GOOD SIDE? DO I LOOK RELAXED?
Me: …you look fine. 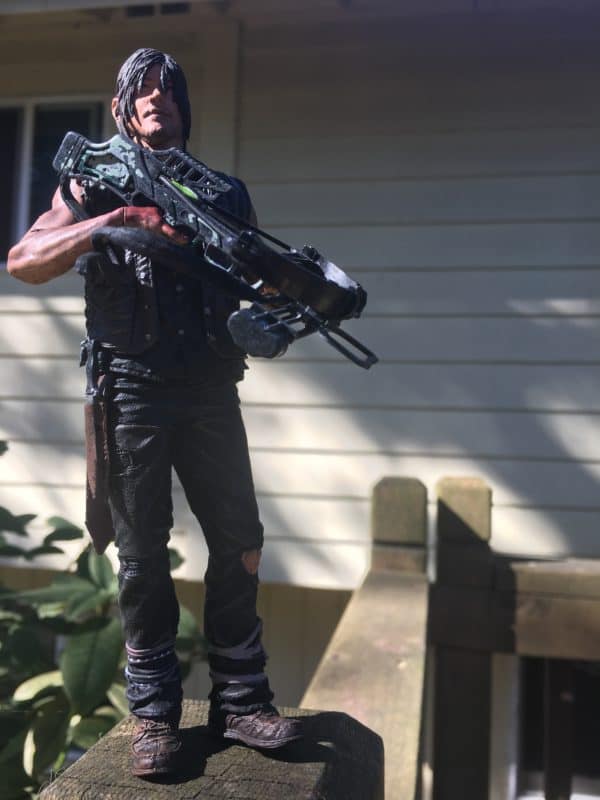 Louis: OKAY, SO HOBBIES. LET’S SEE.
Me: Well, what do you like to do?
Louis: KILL ZOMBIES.
Me: …other than that.
Louis: DRINK BEER.
Me: How about reading? Do you like to read?
Louis: WEAPONS MANUALS.
Me: *trying to keep a straight face* Cooking? Do you like to cook?
Louis: I CAN ROAST A SQUIRREL.
Me: …

Yeah, poor Louis is looking for love. I’m not sure online dating is for him, but he’s insistent, and since he’s going to be living in the backyard with the rest of the crew, I might as well try to be helpful.

Miranda was right, as usual. It wasn’t raining the next morning, though the forecast said thunderstorms later. So I bopped out, holding a mug of scalding coffee. I rather suspected I’d need the caffeine; and it’s handy as a weapon if the mug is big enough–or the coffee hot enough. I reasoned a crossbow firing toothpicks wasn’t likely to be out of coffee-flinging reach, either.

What? Yes, I do occasionally reason, my friends. Not often enough, to hear my exes talk, but hey, there’s a reason they’re ex.

Miranda: HELLO, DEAR.
Me: Good morning, Miranda. How are you?

Miranda: RATHER SHORT ON SLEEP. WE STAYED UP LATE, TALKING. BUT I’VE CONVINCED LOUIS TO MEET YOU, AT LEAST. HE IS…SOMEWHAT SHY.
Me: Im sure his habit of shooting at people doesn’t help.
Louis: THEY AIN’T PEOPLE, MA’AM. 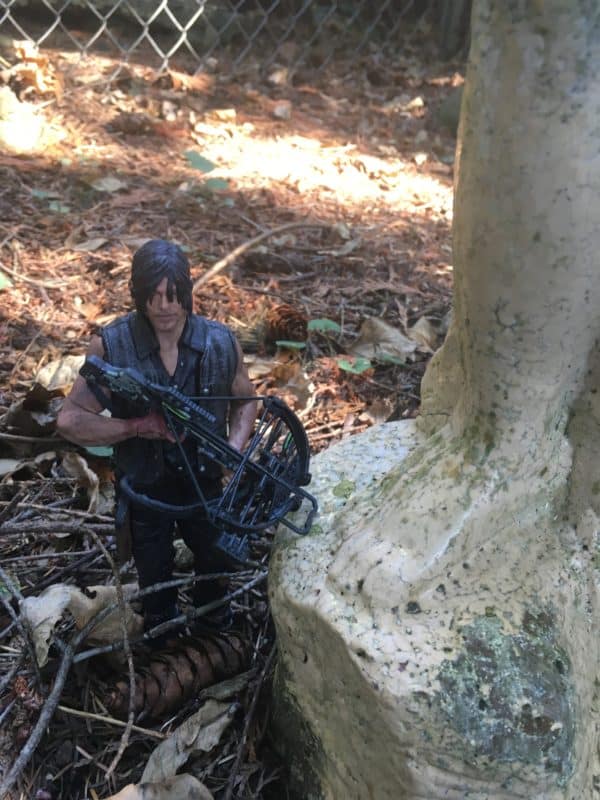 Me: JESUS CHRIST.
Miranda: LANGUAGE, DEAR.
Louis: FUCK!
Miranda: *rather loudly* LANGUAGE!
Me: What the hell are you?
Miranda: LANGUAGE, DAMMIT!
Me: *shifting backward on my haunches, lifting my mug* Yeah, yeah, language. I repeat, who the hell are you, dude?
Louis: *eyeing my coffee mug warily* LOUIS DARRUL AT YER SERVICE, MA’AM.
Me: You’ve been shooting at my backyard residents?
Louis: FRIEND OF YOURS SENT ME.
Me: *bracing self, with a sinking sensation* Oh yeah? Who?
Louis: A MISS MEL. I WAS…WELL, HER CHICKENS ARE KIND OF…LOOK, I DIDN’T KNOW SHE KEPT THEM FOR EGGS, ALL RIGHT?
Me: *digging for my phone* Oh, hell no.
Miranda: IF YOU TWO ARE GOING TO USE IMPROPER LANGUAGE, TAKE YOUR CONVERSATION ELSEWHERE.
Me: *texting furiously* Miranda, you are the backyard oracle, and due respect, but for right now, my friend, shut up.
Louis: DON’T TALK TO HER LIKE THAT.
Me: I will settle your hash in a minute, Mr Darrul. Be quiet.

Now I shall present to you, my friends, an excerpt from the text conversation with my lovely, wonderful, mischievous writing partner, the Selkie.

I stuck my phone back in my hoodie pocket and eyed the fellow. He eyed me right back, and his tiny finger twitched.

Me: Don’t even, dude.
Miranda: HE NEEDS A PLACE TO STAY.
Me: Oh, of course. Of course he does.
Miranda: IT’S NOT HIS FAULT, HIS HOME WAS OVERRUN BY–
Me: Oh, sure. Sure. I’ve got ceramic squirrels, a koala in a corset, a fucking Batman, what’s a psycho with a crossbow? Sure, great, wonderful, welcome to the goddamn backyard, Louis.

I was not very graceful at that point, I guess, but can you blame me? My nerves were somewhat shot. Miranda, thankfully, did not tell me to watch my language. I suspect she knew I would not take the suggestion kindly.

Louis: I WON’T MAKE NO TROUBLE, MA’AM.
Me: You are going to have to stop shooting at Willard. And at Joe.
Louis: WHO? YOU MEAN THE…BUT, MA’AM, THEY’RE UNDEAD.
Me: They are productive citizens of the backyard realm, sir.
Louis: …YOU SURE?

I tipped my head back, my jaw working. I could feel my teeth groaning under the strain.

Miranda: YOU SEE? DESPITE HER TEMPER, SHE IS A VERY GOOD RULER.
Me: I doubt I’m in charge here, Miranda.
Miranda: WELL, NOMINALLY, AT LEAST.
Me: *bringing my chin back down* I suppose I deserved that one.
Miranda: *quietly* YES, YOU DID.
Me: Okay. Fine. Sure, what the hell. If you stop shooting at Willard and Joe, Mr Darrul, you can stay.
Louis: WHAT ABOUT THE SQUIRRELS? THEM’S TASTY, AND A MAN’S GOTTA EAT.
Me: Oh, good Lord.

So I ended up gingerly closing my hand around Louis’s middle, trying to avoid the crossbow–

Louis: CAREFUL, WOMAN. THAT’S MAH KNIFE.
Me: I could hold you by your head.
Louis: *extremely quiet*
Miranda: VERY GOOD, THEN.
Me: Sorry for cussing, Miranda.
Miranda: THAT’S ALL RIGHT, DEAR. YOU WERE IN SOMEWHAT OF A SITUATION. OH, YOU’LL NEED BURN CREAM.
Me: For…? *standing up, a bit too quickly* Oh, fuck.
Miranda: THAT.
Louis: BE CAREFUL, DAMMIT!

I’d forgotten just how hot my coffee was. I swore all the way carrying him inside, ran my hand under cold water while swearing, and introduced him to Fred, George, and Tiny!Batman in a rather perfunctory fashion. George got him a cuppa, Fred clucked over the state of his boots, and Wendy did not take to him but she was polite.

Later, of course, I found out he really was a good ally in the event of squirrel attack. But that’s (say it with me) another story.

When we last spoke, dear Readers, I had decided to visit Miranda. It’s kind of hard to keep a straight face when you’re cleaning off a statue’s tatas, but I managed.

Miranda: THANK YOU, DEAR.
Me: *peeling moss from well-formed breasts* Miranda, someone’s shooting at Phil and Willard.
Miranda: JUST WILLARD.
Me: …okay. *brushing away dirt and polishing her shoulders* And Joe.
Miranda: YES, WILLARD AND JOE. THANK YOU, DEAR.
Me: And putting moss on you. *pointing at the dead campfire* And building fires.
Miranda: I BELIEVE HE THOUGHT I MUST BE COLD.
Me: *gathering all my patience* Miranda, he shot at me too. This isn’t good for the backyard community.
Miranda: NO, I SUPPOSE IT ISN’T.

That’s the thing about having an oracle in your backyard. They’re sometimes a little frustrating to talk to. At least there were no more crossbow bolts winging by. So I gathered my patience again.

Me: *brushing off her skirt* Miranda? Do you happen to know who this person is?
Miranda: OH YES, DEAR. IT’S LOUIS.
Me: *finally feeling like we’re getting somewhere* Lewis?
Miranda: NO, LOUIS. SPELLED FRENCH, PRONOUNCED OTHERWISE.
Me: How did you know I spelled…oh, never mind. Look, so where can I find this Louis-pronounced-otherwise? I really need to explain some things to him.
Miranda: I CAN INTRODUCE YOU, IF YOU’D LIKE. HE CAMPS HERE AT NIGHT, OFTEN.
Me: Good Lord. Okay. When?
Miranda: COME BY TOMORROW MORNING.
Me: *remembering weather report* It’ll be raining.
Miranda: NOT WHEN YOU COME BY. ALSO, YOU’RE OUT OF BACTINE.
Me: You mean I’m going to need it?
Miranda: *nods, smiling gently*
Me: Oh, fuck.
Miranda: LANGUAGE, DEAR.

As usual, she was right. (Don’t ask. It had to do with a frightened cat, Odd Trundles, and leftover spaghetti. I SAID DON’T ASK.) Not about the language, but about the…well, anyway, the next morning I checked the iron-clouded sky, sighed, poured more coffee, and sallied forth.