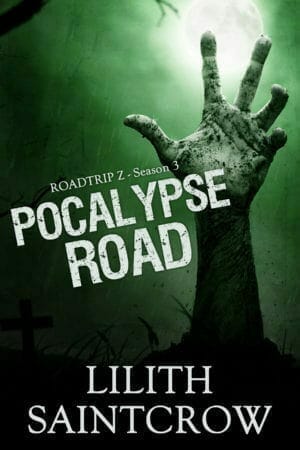 That’s right, my hoopy froods! Season 3 of Roadtrip Z is now out in the world.

Winter has arrived, the walking dead are hungry, and Ginny and Lee’s small group of survivors is making its way towards New York. Other survivors, shaking off the daze of catastrophe, are moving as well. In a wasteland of snow and failing power, of course the zombies are dangerous…

…but it’s the other people you really have to watch out for.

I had a lot of fun with this season. Things just had to keep going wrong, and more wrong, and more-more wrong, in the grand tradition of every zombie apocalypse tale. Be on the lookout for Tuckerized readers, callbacks to old zombie movies, how to haul ammo in a snowbound wasteland, and finally, finally, Lee Quartine getting a break or two, as well as the mystery of just what was in Colonel Grandon’s case from Season 1.

And now, since it’s a release day, I’m gonna go stick my head in a bucket and hope the anxiety dies down. Enjoy!