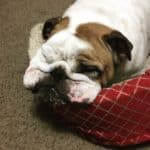 What is as wonderful as a dog, I ask you? Faithful, energetic, stenchful, forgiving–and of course, utterly unconcerned with such things as human manners, having their own. Not to mention gloriously happy with the smallest of joys, and full of zen-like commitment to the Now.

I rolled out of bed somewhat early this morning–part of my ongoing struggle to shake off leftover holiday depression and the resonating pain of a dead book. Lying abed playing Hay Day and obsessively checking social media does not get the words written, and it does not help. It’s warm and safe, yes, and it’s what I would prefer…but no, not helpful. The dogs are largely content with it, insofar as their bladders will allow, but they’re also excited to get up and begin a new day full of fun things and smells.

So it was brekkie for the beasts, brekkie for myself, then Odd Trundles moaning and groaning because he wanted a second breakfast. What he got instead was a walk, which displeased him mightily. He expressed his bafflement by wrapping the leash around my legs and demanding much coaxing. About halfway through a military jet roared overhead. Normally such things are to be ignored, though Miss B hates any kind of loud noise, but this time both dogs wished for me to reassure them that the growling thing in the sky would be held back by my godlike beneficence from devouring them. I coaxed, I reassured, I patted, I demanded, and we got almost to the bottom of the hill, and back up again just as it started to rain.

Then of course there was standing by the back door waiting for both of them to finish any necessary unloading spurred by the activity. Brought inside, both dogs decided the walk had not been enough exercise, despite dragging themselves exhaustedly through it, and proceeded to tear around my office yelling at each other. The growling! The nipping! The dominance mounting! It was a goddamn carnival. And of course they didn’t decide to go tearing through the house, or even down the hall, or into the Little Prince’s room directly across the hall.

No, it had to be my office.

Once they had sorted that out, there was a long session of Odd attempting to roll onto his back. Now, he is a corkscrewed, unwieldy sort, and if he ever makes it all the way onto his back he is unable to properly breathe, so there is much gulping, snorting, wriggling, and many choking noises worthy of the apogee of a particularly slasher flick. Needless to say, Miss B is convinced Odd needs supervision during this gymnastic attempt, and darts in and out nosing at him, play-bowing, barking encouragement, and just generally being an extremely loud and ineffective impediment to Odd’s goal.

Then, of course, as I was attempting to open a few browser tabs and pursue a chain of thought despite all the sonic waves assaulting my ears, they both decided I needed to adjudicate the Who Is The Best Dog face-off.

This is why I cannot have more than two dogs at a time. I only have two hands, and in order to fairly distribute skritches and encouragement I must use them both in equal measure if not equal pressure. (It’s also part of the reason I stopped at two children; one for each hand is quite enough.)

With that done, both hounds staggered away. Miss B trotted down the hall to perform one of her usual circuits–hall, living room, dining room, kitchen, hall again while nosing at bedroom doors, just to check that everything is behaving properly and staying in its proper place. Odd, of course, collapsed precisely in the middle of the office floor. Not on his fancy-schmancy dog bed, of course, No, he’s spread his toys in an arc from the bed to the heater, and settled among them to create a barrier to my leaving. He is sprawled in a puddle, taking up as much space as possible…and now, snoring with abandon. Said snoring is so familiar as to almost be silence, and a blessed relief.

And I, having arisen early like an adult, am now exhausted by the morning’s frolics, and wish only to go back to bed.