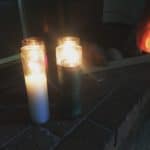 The other night: The Lovers, Nine of Cups, the Devil. All in a row. It’s been a while since I got such a mirrorlike reading, and such clear message.

Of course, this morning, in the long dark shoals before I had to get up, I was jolted out of a dream of Donnie Yen as my werewolf boyfriend during a zombie apocalypse, but I’m not considering that a message. Especially since the heavy breathing I kept hearing in the dream, which I thought was the zombies, was actually Odd Trundles, who point-blank refused to go back in his crate after a 3am “MOTHER I GOTTA PEE, RIGHT NOW, I KNOW I WENT BEFORE BEDTIME BUT I GOTTA, I GOTTA.” He ended up with his giant face in my neck, and my hair on that side is still damp from his jowls.

He still thinks he’s the puppy who slept on my pillow because I was terrified he’d stop breathing altogether. They never really grow up, our furry friends. I’m on the fence about whether we ourselves do.

I’m still making my way through Facing the Extreme. I am having trouble with a few of Todorov’s base assumptions–like the one that human judges can be impartial or objective. I mean, certainly, a good judge aims for that, but is it really possible? It’s more of a goal to strive for than an actual can-be-done-completely-achieved. On the other hand, the book was published a decade ago, and there have been some advances in understanding bias since then. Another set of Todorov’s base assumptions, his habit of gendering responses to totalitarianism, grates on me with increasing regularity. I rather suspect him of cherry-picking survivor narratives to suit his gender-assumption hobby-horses. Unconsciously, of course, but he seems really invested in women being passive, forgiving creatures even when shoveled into death camps.

You can tell what I think of that.

Anyway, we’re near the end of the book, so Todorov’s making assertions that the front half of the text is meant to have set up and provided proof of varying kinds for, and I just don’t see that the narratives (survivor or otherwise) or logic he’s provided bear out said assertions. Still, it’s not a bad thing to have to stop while reading and think hard about just why one disagrees with a philosopher.

The Sekrit Projekt continues apace. Yesterday was a measly 3.5K words, but I got two crucial scenes done and dragged the man with the gun in, kicking and screaming. (He didn’t want to show up just yet, but it wasn’t his call.) By the end of it, I was exhausted, so his appearance needs some polish in order to make it properly eerie. (And he doesn’t have a gun, but a claymore, I think. Or maybe an axe.) But it’s there, that part of the corpse is on the table, and I only have 20K left to write.

I suppose it’s time for yoga now, and there’s a run to fit in today, too. Going back to bed, while certainly the most appealing option, isn’t even remotely possible.

Ah well. Over and out.