Oh, I can’t stand the suspense. I’ll tell you.

She Wolf and Cub, re-edited, is now a book you can preorder! 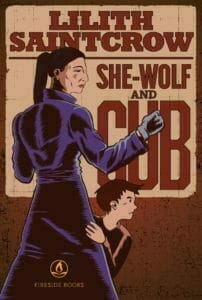 Ebook available for preorder from Kobo, iBooks, and Amazon; paperback and Nook will be added on Release Day, March 28.

Longtime readers will remember She-Wolf was originally a Fireside serial. (They’re committed to paying writers a working wage, so show them some love if you can.) I had a ton of fun writing it, and I love the heroine. She’s one of the few characters I actually like personally, for reasons probably best left unsaid. Longtime readers will also remember PACK, an e-short out through Orbit, that was one of my first attempts at writing the short story that eventually became She Wolf and Cub. Just in case you wanted to see how a story can change, and morph, and become something COMPLETELY DIFFERENT.