There was a restless rain on the roof this morning, sweeping and tapping. Or maybe I was restless. The day after a release is not quite as fraught, but it’s still…well, I woke up several times last night.

It’s a funny thing. Even though the She Wolf was out as a serial, it didn’t cause me nearly as much angst as the revised novel going out into the world. Something about the words “new release” makes me catch my breath and doubt myself. Of course, that’s a common occurrence. Catching and doubt are part and parcel of the human experience.

Chuck Wendig is nicely letting me stink up his blog joint today, with the story of how She Wolf got written. He’s a peach, that Wendig man. 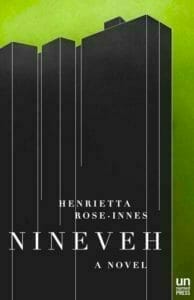 I spent yesterday decoupaging a craft box (with Odd Trundles’s help and Miss B’s supervision, which means LOTS OF DOG HAIR IN THE MOD PODGE) and reading Henrietta Rose-Innes‘s Nineveh. I heard of it over at Geoff Manaugh’s blog (highly recommended, by the way) and it was an intense, though somewhat short, read.

The writing is beautiful, and I was furious at the treatment of the main character Katya. As a picture of an abused child making constant excuses for the abuser, it was really spot-on. Showing how that trauma echoes, and how insidious is the urge to believe you’re at fault instead of your abuser–because if it’s your fault, you somehow retain some agency–was, I suspect, not what the book was written for. I’m not sure it was intended, but boy howdy, idd it ever strike a chord.

I’ve often said it doesn’t matter what the reaction is to your work, as long as there is some reaction. This isn’t to say being an asshole is the preferred mode for writers, nor is it a defense of shock-jock writing. Rather, it means it doesn’t matter if the reader reaction to your work is love or hate. What one must avoid is the middle ground, the meh. Nineveh made me furious on Katya’s behalf, especially at the ersatz freedom she gains at the end. I wanted to reach through the pages and smack her overbearing father. I also rolled my eyes at the obligatory “this is lit fic by a woman so of course she must try to sleep with someone” trap Rose-Innes fell into. Despite what what one might think, both are reasons for me to recommend the book. I was, if you can’t tell, fully invested in Katya and her work, and just as fully invested in the mystery of the goggas and the beautiful, beautiful writing.

Rose-Innes is a fine craftswoman; I almost never felt the urge to look under the hood, so to speak. It’s rare that I fall so completely into a story, shutting off the editor inside my head. Rose-Innes made me feel the mud and the insects, but my skin wasn’t crawling with loathing. Rather, she made me share Katya’s love for, and lack of fear of, creepy-crawlies and gluey dirt. That’s worth the price of admission alone.

I’m sure my second reading will yield up something closer to what the author obviously intended instead of fury at the mistreatment of Katya and her sister, but that’s for another day. At least (spoiler!) Soldier the dog made it, and that’s enough for me. TL;DR: great book, recommended, both thumbs way up.

As usual on Release Day + 1, I have to get back to work, catching up on wordcount from yesterday’s anxious uselessness. Miss B would also like a ramble, so it doesn’t matter if the rain is restless or not, we’re going to be in it at some point.