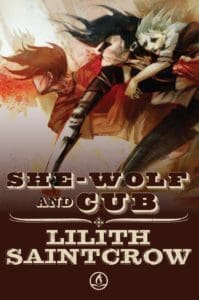 Now available for Kindle, Nook, Kobo, and in paperback.

Mucho thanks are due to Fireside’s team of fabulous people, especially Brian White and Pablo Defendini. And now my cyborg-assassin-Western is out in the world, rolling around and racking up a body count. See if you can spot the names of original Patreon backers in the book! Also, I’ve just found out that even a release day for a re-edited serial makes my stomach knot itself up with nervousness. Something about a paperback makes it seem all too real.

If you read the serial and enjoyed it, you could do both me and Fireside a huge favor by leaving some stars or a review on the platform of your choice. We’d both muchly appreciate it.

And now I’m going to finish my coffee and see if my running togs are dry yet. A good hard half-hour at full speed will either settle my stomach or empty it to the point that it has nothing left to complain of.