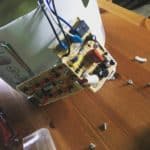 Last night I typed “finis” at the end of the Afterwar zero draft. It weighs in at 94K words and will only get longer because most of it is so, so lean. Some scenes are full of dialogue that needs trimming and plenty of physical and action tags put in so the reader can see an approximation of the movie in my head.

It may be a horrid, stupid, ungainly mess, but it is no longer a horrid, stupid, ungainly, unfinished mess. True to form, though, I woke up this morning knowing where at least two more scenes need to be shoehorned in. I’ll write those on a 3×5 card and set them aside, because if I have to look at that book ONE MORE TIME right now I will throw something at my desktop, and that’s not good for anyone.

So I have a massive book hangover today. I honestly thought I’d never finish the damn thing, it would be a millstone around my neck for the rest of my short-uncomfortable life. The fact that early March is full of social obligations (birthdays, family visits, and the like) meant I could feel the book itching to be born, swelling like a giant tumor under the surface of my brain, but I was physically unable to get to the bloody keyboard and get as much typing done as it needed. That required a deathgrip on my temper, too. I am downright cranky when prevented from finishing a story-birth.

But yesterday I coughed up a 5K+ chunk, around the daily round of (almost-adult-but-not-quite) child care and a ticklish, complex, mind-numbing project I wanted to get done at my weekly volunteering. It was kind of a relief to just put my earbuds in and concentrate on something that wasn’t the book begging to be born, but when I finished the glow of satisfied accomplishment was marred by the scratchy-itchy-bugs-under-the-skin of NEEEEEEDING to write.

So, I went home and got to work. Dinner was leftover pizza for the Prince (the Princess was at work) and toast for me. I dove back in…and god damn it, but the book would not die. I stabbed and I stabbed, and when it expired…well, I was surprised, to put it mildly.

I typed finis, centered it, and stared at the screen. And then I burst into tears. The sobbing was mostly relief but partly the rubber-band snap of frustrated rage.

So, long story short, I’m pretty useless today. Book hangover is in full swing. A long run in the sunshine might help; it will at least exhaust me enough to make sure I sleep tonight. My dreams will be full of inchoate anxiety, and I now have two projects hanging fire that I should catch up on since I shifted all my resources to finishing this one.

That’s a battle for another day. Today, I rest. I won’t quite call it good, but I’ll certainly call it done.