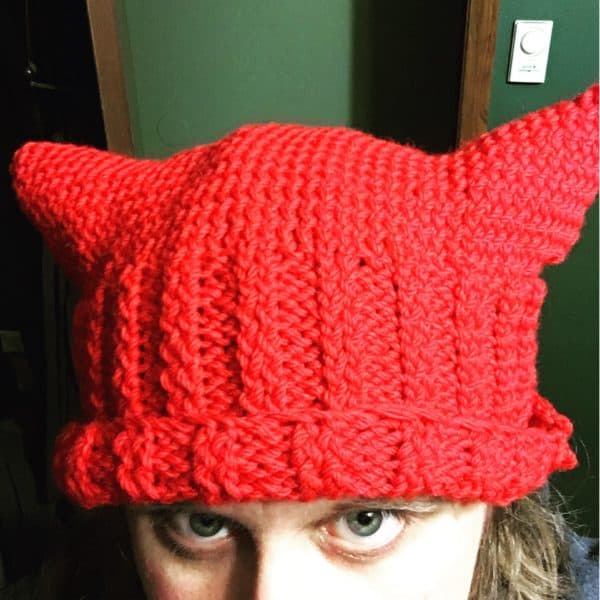 BEHOLD, the Menstrual Fury Hat. It’s a Pussyhat Project hat off this pattern. I had a slight problem though: I loathe pink. I just…do. So I did a couple practice hats in a very dark red, almost burgundy acrylic–I called it “clotted menstrual blood color” on Facebook and was surprised when nobody unfriended me. The first one turned out comically large, so I’ll probably use it as a scrubbie or repurpose it as a bag, who knows? The second, done on size 8 needles instead of size 10, turned out beautifully, and the Little Prince claimed it. I explained what it was for and he said, “Oh, okay. Can I still have it?”

Then I got some bright, bright crimson wool, and knitted another one. Which you may see above, and I wore to volunteering yesterday. (You can also see the circles I’m growing under my eyes. I’m proud of those.)

Since it’s not pink, I’m thinking it’s technically not a Pussyhat. So I called it the Menstrual Rage Hat. Then it occurred to me that “Fury” was better, because of the Erinyes. Several people have floated the idea of knitting a few more and putting them up in an Etsy shop. When I get supplies to make earrings I might do that, just for fun. Of course I’d probably have to charge something like $12-$15 and shipping, just to make it feasible, and who’s going to pay that for a hat that doesn’t have a feather? I mean, really.

Right now, though, I’m knitting a shawl. No, it’s not red. It’s gray and black, and I might even add fringe when I’m done with it. I do a couple rows in between achieving wordcount for each project I have going, and it’s growing at an exhilarating rate. I’d forgotten how much fun knitting is, when I’m not spitting with frustration at a pattern I don’t understand.