This morning I dragged Odd Trundles out for walkies right after his brekkie. He was quite put out, not only because this represented a Change in Routine, but also because it cut into his morning “I’m bored, let’s do something!” bitching. So he hung back and tried to wrap the leash around my legs, which meant Miss B got her nose down and started heeeeerding him, which tangled her leash around my legs, and…yeah. Fortunately my agility stats are still going strong.

I also used 5calls and actually got through to a very nice staffer in my Congresscritter’s office. Said Congresscritter is a Republican I’ve voted against every. damn. time., but she’s working for me and I might as well make my voice heard. Please, if you’re calling, be kind to the staffers on the phone! They’re usually unpaid interns doing a shit job with grace and patience, so be polite. It helps to have a script, too. Even if you don’t use it, having a flowchart script of what to say can get you over the bump.

Now that the dogs are relatively calm (Miss B will need an afternoon ramble, just to be safe) I can focus on Afterwar. And Roadtrip Z. And bonus wordcount for a Sekrit Projekt I’m aaaaaaalmost ready to announce. ALMOST. Stay tuned for that.

Here’s your usual daily reminder to hydrate, make sure you get something to eat, and take a few deep breaths. It feels like the world is burning down, it’s okay to feel like screaming, none of what’s going on politically now is “normal” or “sane” except the resistance to der Turmper. You’ve got to take care of yourself and keep yourself human, you have a right to do that. I offer you a hug, and the knowledge that you’re not alone.

Also, schnorgles from Odd. Just look at that face. (And that seasonal alopecia!) 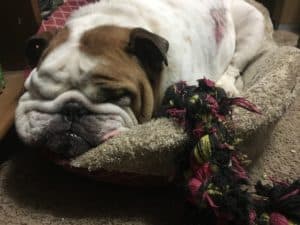