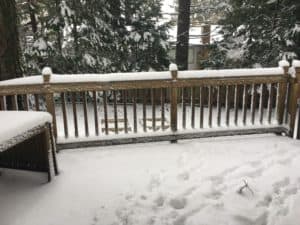 I know some of you will look at this picture and go, “pfft, that’s not even two feet of snow, what’s the problem?” The problem, chickadees, is that even six inches of snow is like six feet here, because the PNW gets this kind of weather so rarely we don’t really have the infrastructure to deal with it. That means roads go unplowed more likely than not, and things like banks, schools, and city government shut down. It further means cars get abandoned by the roadside, the power goes out for many many people, and commerce grinds mostly to a halt. The last time this happened was in 2008, just to give you an idea, and wasn’t that a mess. (Hint: Yes, yes it was.)

On the bright side, there are snowball fights, and the kids are having a ball sledding down the hill. And while I’m writing a zombie apocalypse in a winter storm, there’s a certain symmetry to being housebound under a blanket of cold white.

Soon it’ll warm back up and the rain will wash everything away, which will return us to flooding and moss. So it’s not all bad, but I’m beginning to get a little itchy, wanting to get out of the house for once. Treadmill running isn’t the same, and Miss B is on the verge of bored destruction–there are only so many laps she can do of the backyard to work off her energy. Odd Trundles, being built low, brushes his chest on the snow when he goes out to attend to Nature’s call, and when he gets back inside he looks at me very much as if I have created this white wasteland just to inconvenience his tender undercarriage.

Anyway, that’s the weather where I am. Today is Thursday, and that means another chapter or two of the serial for my lovely Patreon patrons. So stay tuned, that will be up soon, and I’ll get back to telling the story of who was shooting at Willard in a bit.