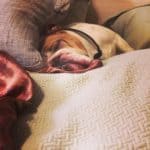 Odd Trundles ate breakfast–not out of his bowl, alas. No, he ate from Miss B’s bowl. The two of them have a ritual most mornings, and it involves sitting in their accustomed places while I place the bowls, sniffing at their breakfasts, then switching bowls and gobbling the other dog’s (exactly the same) ration of kibble-and-whatever-else. So, Odd stuffed himself, then ambled into my bedroom and hopped onto my bed. He is currently snoring so loud I can hear him from the office.

Oh, to be a bulldog.

The weekend passed, as weekends do. On Saturday my writing partner and I went to the Ladybug Bazaar, as we are wont to do. The regular people she buys from soap from were not in evidence–they have an orange patchouli bar I love with a fierce abiding passion–but there was someone new, a leatherworker who had moved from from Boulder, CO. I am now the proud owner of a pen bandolier, and the Princess has a new (refillable) journal. (So do I. It will be used for Afterwar things.)

We also stopped by a tea shop we were both desperate to try, but after being snubbed for a good twenty minutes or so we left. *shrug* (Be warned, the website has an autoplay.) Given the amount of tea we both buy, and the fact that we both love high tea and all its furbelows, not a good move on a business’s part. But there are other tea shops, ones where we (and our cash) will be welcomed.

SPEAKING OF MY WRITING PARTNER, LOOK AT THIS SHINY NEW BOOK SHE WROTE AND YOU SHOULD READ.

Disaster reporter and internet celebrity Jack Tucker is disillusioned after a stint embedded in Iraq. The IED that destroyed his team’s Humvee brought him tragedy and regret, robbing him of the joy he took in his job—or anything else. He spends his days in a small Camden bookshop, struggling with writer’s block, until the elderly proprietor dies, leaving him adrift.

Lexie Worth abandoned a promising career to keep her uncle’s beloved bookstore alive. But the store’s tabby cat hates her, local poets invade twice a month for scurrilous readings, and she knows she shouldn’t get involved with sexy, troubled strangers like Jack. When the FBI comes knocking, with suspicions of fraud and racketeering, Lexie realizes someone’s after more than a first edition or two.

Someone’s been using the bookstore to hide their crimes. Someone dangerous—maybe even deadly. Jack wants to protect Lexie—if he can believe her. And if she doesn’t find out exactly who he is…

Just so you know, it’s available through Amazon, Barnes & Noble, and many other fine retailers. There’s a paperback version coming out soon, too.

I am beside myself with joy, because I love this damn book. Library ladders! Pink horsehair sofa! A grumpy cat! DANGER AND IDENTITY THEFT! BUY IT READ IT LOVE IT LIKE I DO!

Ahem. Anyway, yeah, that’s my Monday. Afterwar and Harmony both need wordcount in the worst way. Fortunately, I can run now for the first time in a week or so, and the twitching under my skin (and Miss B’s) will no doubt enjoy being purged with sweat and effort. I can breathe now, and the snot had slowed to a trickle. (You’re welcome for that mental image.) So it’s off to the races, in more ways than one.