Poor Trundles. There was not enough bacon grease in his breakfast bowl this morning (a mere dollop! how could I be so cruel!) and for some reason, the pillows on my bed, heretofore perfectly adequate for the fort he builds himself daily for his morning naps, was not to his liking. Consequently, after a great deal of grousing, his temper broke. He tore out of my room, scrabbled down the hall, did a lap of the kitchen, then a lap of the living room, and scuttled down the hall the other way to enter my office on a flood of remonstrances and barking.

With his displeasure expressed, he then promptly fell over into the dog bed in my office–the one he would never sleep in while he was a puppy and now uses to store whatever toys he can subtract from Miss B’s watchful nose. Which means he’s sleeping on two tug-of-war ropes, a couple Hurleys, and a sad little plushie he’s torn the stuffing from but refuses to part with the rest of. The last is merely a rag of polyester fur now, but apparently it’s Trundles’s best friend aside from Miss B, and any attempt to remove it causes lamentations.

Something tells me it’s going to be a very long Thursday for a certain cranky bulldog. 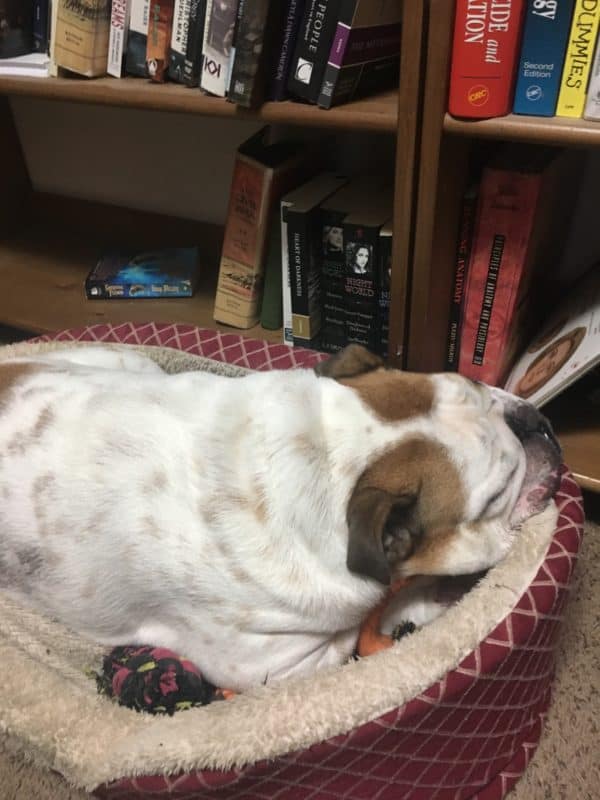