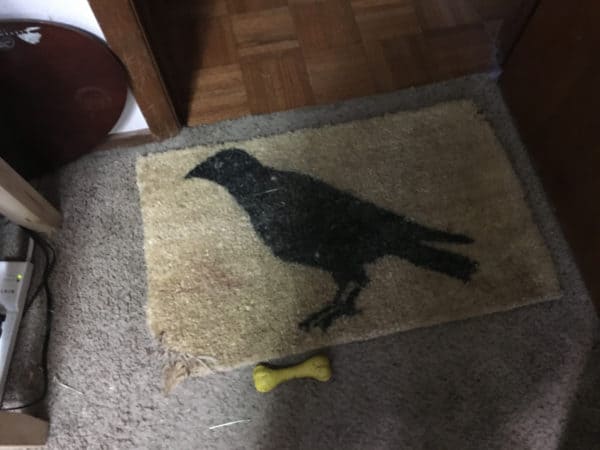 I generally put a mat down for my office door, more as a threshold reminder that here is where the work is than to clean off anyone’s shoes. Odd Trundles has this…habit, I suppose you’d call it?–of chewing them up. He tore my old skull-and-crossbones mat right in half, then tried to consume its replacement as well. I thought a cocoanut-fibre mat would dissuade him, but he just thinks it’s a colon cleanse, when he’s not using it to scratch his paws. (Read: tearing at it with all four feet as if it’s personally offended him.)

Miss B will watch him attempting to disassemble and consume the mat with the air of a woman watching a man too old for a skateboard attempt a steep hill. I scold when I catch him at it, and pick the saliva-dripping bits of none-edible cocoanut parts from his slavering jaws. He, of course, thinks it’s petting time and a great game. Much happy, many slobber.

All things considered, the mat is holding up well. But I’m thinking I should pick it up and put it somewhere out of Odd’s reach when I leave the house. He might run out of paper bags.