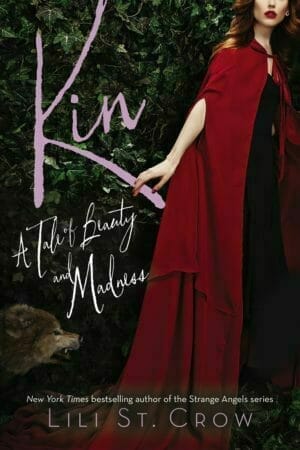 Once I had written Cami and Ellie’s stories, well, Ruby couldn’t be far behind. I had only foggy idea of what her story entailed. It was one of those situations where I just had to trust that the Muse knew what she was doing and it would turn out all right.

Red Riding Hood has never drawn much of my interest. I suspect Freud ruined it for me. “Don’t go into the woods, little girl. Those are huge… tracts of vast dark sexuality!” As a slut-shaming or even a cautionary tale, I found it objectionable. Even the violence in it didn’t move me. It took me a while to figure out that I didn’t have to listen to the (mostly male) academics (or the male-gaze dominated cartoons or movies or TV shows or or or) winking and nudging about how the wolf was a guy hanging out at the corner to lead a virginal girl astray and RUUUUUUUUIN HER.

Fortunately, my little Red didn’t have to buy into such bullshit.

Instead, her story became about different things. The pressures of love and obligation, for one. Ruby has something I never did: she was born into a tightly knit, loyal clan. It took me a long time to realize not all families were like mine, minefields of pain and degradation. I did go through a phase where I went the opposite direction and assumed other families were perfect, and mine was fucked-up because I was poisonous. (After all, I’d been told for most of my life that I was a mistake, that I made everything worse, that I was a problem.) It took a long time before I realized there was a continuum of family fuckedupness–like much else in life, there’s a gradient. Even a good, loving family is full of pressure. (Even good stress is still stress.)

Ruby spoke to me of things I hadn’t thought of since my own teen years. Boyfriends with quick fists and how they move you bit by bit through a maze until you’re trapped. Hated, necessary duties, and the feeling of being cheated upon learning which things were not necessary. The fear of adulthood, the massive change that hits once school’s over. Suddenly being on your own in a world they’ve told you is worse than what’s at home–because how would they get you to stay if you thought there was a chance of a place where you wouldn’t be beaten or screamed at by rageaholics?

The longer I wrote, though, the more I realized Ruby’s story wasn’t so much an exorcism for me as a synthesis. The structure of Little Red Riding Hood was an alchemist’s set-up, and I was distilling.

Ruby, Cami, and Ellie save each other. Sure, there are princes in their fairytales, but it is the friendship between these three young women that brings them through. It is the friendship that keeps looking for each of them when they disappear, that breaks well-meant (or not so well-meant) rules in order to keep searching, that brings each of them back from their abyss. Each of them is a reflection of the others (those doubles and triples again) and the message they carry is the same.

That’s another thing about fairytales–you can choose to find hope or despair in them. Cautionary or elevatory tales, it’s up to you.

Life is dangerous, and when you’re young, there’s a certain lack of proportion. You haven’t lived long enough to understand some things are molehills, not mountains. If you survive (psychically or physically, or both) you can eventually learn. Survival, like telling stories, is most often a bloody process. Even in the best situations, with people who have the best of intentions or who are doing the best they can, blood can be drawn and pressure can mount.

Ruby was always the character who seemed the most “together.” Even Cami and Ellie expected her transition into adulthood to be seamless. One of the more surprising things about her was that she was just as uncertain as either of her friends, she just coped differently. It’s like Madame told me once about ballet class–nobody is looking at you, everyone is worrying about their own dancing. But you don’t know that when you’re young. You don’t know everyone is faking it. You don’t know that everyone around you is as uncertain as you are; it takes a long while before you begin to suspect that everyone is stumbling along in the dark no matter HOW seamless their confidence appears from outside.

When you set out to tell a fairytale, you’re opening the door to forces bigger than yourself, an accumulated lightning-charge that will teach you all sorts of lessons, painful or not. I’d made it through the woods, to the castle, past the gate. I’d told the stories I needed to tell, the stories that needed me as an outlet. It was exhausting, and I grieved a little, because I knew Cami, Ellie, and Ruby had other mountains to climb as their lives unreeled. I had to say goodbye to them, because they were different people now. It’s a good feeling, but also a painful one. There’s no birth without that pain, no creation without that discomfort. Even the stories that tear their way out, red in tooth and claw, heal over.

If there is a balm to be found in the ending of fairytales, in that happily-ever-after, it’s that even the worst things can heal. It doesn’t have to be ever after, it can just be for now, and that’s okay.

A scar, after all, means you’ve survived.