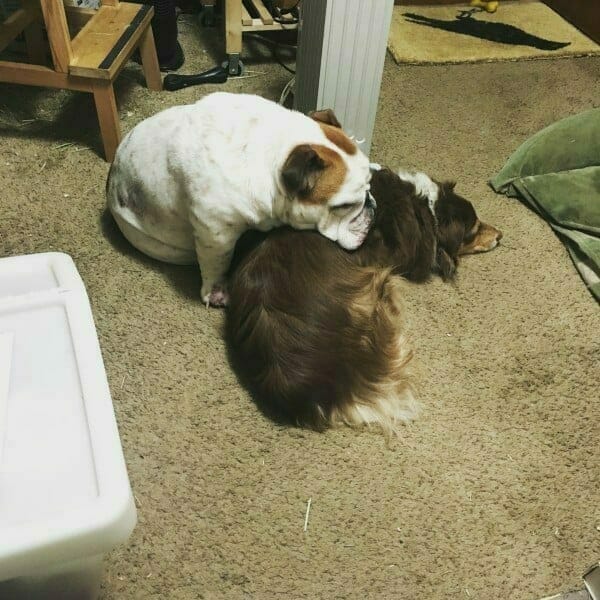 Ever since he was a frail, sickly puppy, there have been some days when Odd Trundles cannot settle or sleep unless he is as close to Miss B as he can possibly get. We often (half)joke that she reminds him to breathe. When faced with something unfamiliar, Odd’s default is to hide between my ankles, but if for some reason that shelter is unavailable, his first instinct is to glance at Miss B for guidance.

Miss B was used for breeding too early in her life, and still has medical problems resulting from that. Additionally, if she can’t herd something, she’ll attempt to mother it. Really, it was a stroke of luck we came across Odd, because from the instant he showed up, she’s been ready to unceasingly guide, correct, boss, and direct him about. Odd, bless him, needs such constant supervision, and B’s need to supervise is large enough to cause problems if not properly directed.

Really, they were made for each other. It hurts my heart to think of the inevitable, but I know that if Odd ends his sojourn on earth first he’ll wait for her spirit to tell him what to do, and if B goes first, Odd will have someone waiting for him when he goes.