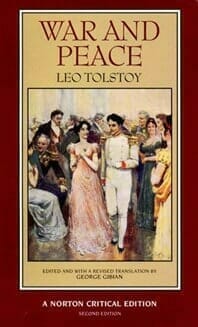 Over the holiday I read War & Peace, so I can check that off my Lifetime Accomplishments List. It even kept me occupied. (Thank goodness for Norton Critical editions. I love their footnotes.) Tolstoy’s resolute misogyny irritated me as much as misogyny ever does–and you know, next time I read, I’m going to be marking conversations between female characters and seeing if they pass the Bechdel.

I think maybe one will, Sonya and Natasha arguing about packing all the rugs and everything when the Rostovs are fleeing Moscow. But I’m not sure it qualifies as a conversation, per se.

At the end of the first epilogue, all I could think was “Boy, Pierre’s going to have a bad time when the Decembrist revolt happens.” (Later, I read that Tolstoy had intended to write about that very thing, and wrote War & Peace instead. WHOOPS.) Then came the second epilogue, all about Tolstoy’s theory of history vs. free will. As hard as he keeps trying to insert God into history, it just wouldn’t fit, even with the shoehorn of rhetoric. As a thought experiment, the entire second epilogue was pretty nifty, and as a peek into the author’s mind it explained a great deal of why his characters behaved the way they did.

Yes, there were a million names for every single character. It’s like Shakespeare, one’s brain cramps for a little bit, then one falls into the rhythm and starts thee-ing and thou-ing with iambic abandon. Other reading on the Eastern Front and the 1918 Revolution and subsequent civil war, not to mention a bit of Soviet history, prepared me for the multiplicity of names. One just gets the hang of it after a while.

The whole thing was a vast, enjoyable experience. Reading a book like that is like wandering through the large house of an author’s brain, having time to stop and look at things, eat a little from every table, touch a few draperies and picture frames. I was annoyed with Natasha at most instances, especially when Kuragin was making eyes at her. After a little while, though, I thought here is an ignorant teenage girl, cut her some slack, and I did. Though I’m sure Tolstoy meant Prince Andrew to be a noble and sympathetic character, so his eventual “forgiveness” of Natasha carries weight, I found him a jerkwad who hadn’t loved Natasha as much as he said if he was willing to throw her away after that. BUT OH WELL.

Pierre Bezukhov irritated me as well, mostly because Tolstoy made a point of him “not understanding” anything going on around him. Consequently, what Tolstoy intended as great struggles within the soul of a man who wanted to do good for the whole of humanity fell a bit flat. I kept thinking, okay, Tolstoy, if this guy is such an idiot, how does he retain any of this wealth he inherited? How did he learn how to write? How the everlasting fuck did he even remember to breathe on a daily basis? I was not trembling in fear for Pierre when he witnessed the executions, I was thinking Tolstoy would kill him and put him out of his misery.

The thing that irritated me the most, though, was Tolstoy’s treatment of Sonya Rostova. I really, really wanted bad, bad, very bad Dolokhov to be redeemed and take her away from the nasty Countess, whose betrayal of Sonya once she sees a chance to marry her son to an heiress is un-fucking-forgivable. Making Sonya into a “sterile flower” who “lives for self-sacrifice” and ends up taking care of the kids of the guy who swore her eternal love and then married the rich girl instead was just…Tolstoy, you asshole. And no matter how bad Dolokhov was, he treated his family, especially his poor mother, so well I wanted more of the book to be about HIM, dammit!

But no, instead I got Natasha and Prince Andrew and Pierre. *eyeroll* Which, fine. The bit players around them were far more likable, but perhaps that was Tolstoy’s point–when you get far into the head of a character, you’re bound to find something you don’t like, and it’s often those we know best that we like least, even if we must love them.

As for the rest of it, I enjoyed Tolstoy’s portrait of Kutuzov to the max, and his characterization of Napoleon sent me into fits of giggles more than once. After reading Caulaincourt’s version of Napoleon’s march into Russia, I was pleased to see a Russian side of the tale. As giant set pieces go, the burning of Moscow–and Pierre lost in the flames, one of the few times he didn’t irritate me– and the battle of Borodino rival anything Game of Thrones could put on. Tolstoy was very, very good at showing soldiers under fire and the chaos of combat, and showing the sudden whims and violence of a mob. (I actually, physically gasped when Rostopchin gave the boy over to the mob.) Plus, the tastes of life in “old Russia”–Nicholas and Natasha’s sleigh ride, Sonya at the samovar during the first epilogue, the sudden sharp turns in influence at the Petersburg salons–were more than worth the price of admission.

All in all, it was time well spent, and I don’t begrudge a moment of it. I may eventually read it again, to pick apart many places where characterization succeeded instead of galled me, and to suck the marrow out of some of the (many) savory bits. I think before I do, though, I’ll have to read The Kreutzer Sonata and Sofiya Tolstoy’s answer to that particular little tale.