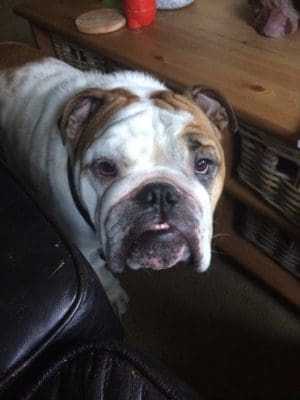 Odd Trundles wishes to inform you all that it is RAINING, and he does not like getting his paws wet in order to Do His Business outside. He further wishes to inform you that Mum is very busy and will not throw the bestest toy for him another ten times, and that his breakfast was not satisfactory because it is now gone. He is a dog of discriminating taste and many talents, and the least we could do is give him an eternal, infinite brekkie.

Clearly I am the cruelest puppy-mommy in the whole UNIVERSE, and he told me so in ten solid minutes of groaning and sighing before settling with his face on the heater, basking and snoring.

Poor Trundles. He does not understand that Mum has to stare at the glowing screen and do weird tiptap things with her monkey paws in order to assure his supply of kibble. The monkey paws are, in his humble opinion, for giving him ear-skritches and feeding him lots of treats. CLEARLY I am falling down on my duties, but he will magnanimously allow me to make it up to him with the aforesaid infinite breakfast and many skritches. After, of course, he finishes broiling his face on the heater.

Every so often he actually licks the heater’s surface. (It’s one of those portable heated-oil thingummies.) I am deadly afraid he’ll burn himself, but he hasn’t yet. The little weirdo must, despite all appearances, have some sense of self-preservation. Faint and fading, but there it is.

Moxie the squirrel, however, does not seem to. She was in the compost heap again yesterday, and there was a brief but glorious second where Miss B thought she had finally achieved her life’s dream (again) of catching one of the little rodents. (This time, for once, I believe Miss B had plans for what to do afterwards.) There was an explosion of decaying matter, Moxie went flying (screaming “FWEEDOM!” and something about “HAUNTH THE NIGHTHTHTHTHHHHP!”) and Miss B got half-stuck in the bin. I had to drag her out and try to brush her off, all while she twisted and moaned in my grip, a blackened banana peel caught on her rump, while Moxie sprawled dazed under the lilacs still chittering something about “GET DANGEROUTH!”

I did not let go of Miss B’s ruff until Moxie had gathered afresh some of her, well, moxie. Once Moxie was staggering for the fence I let B go, and she bolted straight for the punch-drunk arboreal rodent.

Who gathered herself enough to scream “FWEEDOM!” again, and by that point Odd Trundles had noticed something was going on. As I struggled to get banana peels and other crap off a wriggling Miss B, he had begun scuttling across the yard. Though he is only capable of short bursts at top speed, once he has achieved it, momentum provides him with a great deal of force. He was not barking, for once, he was too excited at the prospect of NEWFRIEND*snortwhistle*NEWFRIENDNEWFRIEND!!! to utter a single sound. (Plus, he was probably out of breath in a big way by the time he had achieved full steam.)

So, I let go of Miss B just as Odd appeared in my peripheral vision as a cream-and-brown blur.

Of course I yelled “OH FUCK NO–” It wouldn’t be a squirrel story if I didn’t.

Anyway, Moxie made it to the noble laurel at the corner of the fence and began climbing for her life. Miss B probably planned to levitate after her, and was gaining speed. Odd Trundles, having veered just slightly to account for Moxie’s flight path…

…crashed headlong into that corner of the fence, bounced off, picked himself up, and tried to throw himself at it again. I believe he thought some insidious monster mimicking a fence-pole overgrown with laurel branches had eaten his new friend, whom he was now desperate to save. Miss B leapt, I screamed another cavalcade of obscenities, and Odd staggered backward in a semicircle. His high-pointed ass struck the fence near the apple tree and he jumped, thinking it was an attack, and in his dazed condition he reverted to default: Bark, and hightail it toward the safest place in the world.

I.e., right between my ankles. At least B didn’t land on him (again). She hit the ground, levitated again, Moxie began screaming words I hesitate to repeat (though I believe “nutfucker” is not purely a squirrel term) and B, balked twice and full of compost, decided the only thing she could do was take off on a running tour of the yard. (I should mention: I WAS WEARING ACTUAL SHOES. HALLELUJAH.)

Miss B, bless her tiny doggie brain, is capable of amazing speed, but that didn’t worry me. What did worry me was the imminent arrival of sixty pounds of terrified bulldog at my ankles. I barely had time to throw a foot out and drop into the most beautiful demi-plie in second I’ve done in years.

So it was that Odd Trundles sped right between my ankles, dig his nails in, and created a furrow all the way to the compost bin, which he crashed into the front of and consequently almost broke the plank holding the pile back. (There is a definite dent there.)

I took advantage of Odd’s being stunned to coax him toward the stairs, while Miss B ran in circles yapping. Finally, to finish everything off, she zoomed to her favorite denning site behind a rhododendron and began digging frantically. I believe at that point she had forgotten about Moxie, who I am sure had reached the safety of her Sooper-Sekrit Arboreal Rat Lair and was nursing her shattered nerves.

So it was that I had to give Odd a muscle relaxer (head trauma is bad for his spine) and pet and make much of him. I did not let Miss B in until I brushed all the gunk (and fresh dirt from her denning) away. Thank every god there is that an Aussie’s coat is wash-and-wear; all sorts of things just dry up and flake off. I am sure there are bits of compost all over the house by now, though. And the two of them are relatively quiet this morning. I believe yesterday’s fun and games, when added to a five kilometer run for Miss B and the intense excitement of houseguests screaming the names of landmark court cases (teenagers studying for an AP Gov final), require much napping to speed recovery.

And that, my darling chickadees, is how a bulldog and an Australian shepherd team up with a squirrel to turn my compost pile so I don’t have to.